Yellow Jacket Nest Rising Out Of The Ground

Hesutu means Yellow Jacket Nest Rising Out Of The Ground.

Hesutu was an apprentice shaman to Liwanu when the Spaniards first arrived. Liwanu saw the sickness that overtook his people, and he saw how poorly they were treated. He decided to follow the advice of Ayita and urged Chief Sewati (Curved Bear Claw) to move the tribe. They relocated to the redwood forests across from San Francisco, and kept to themselves there. They were not there long before Ayita left them, claiming she was going on a spirit journey to seek a cure to the sickness.

In the 14 years or so that Ayita was gone, Hesutu gained the trust and faith of the people and advanced well in his training. Most figured that Ayita would never return. During this time, Liwani passed away, and Hesutu took many spiritual journeys, wandering into the Nevernever. He met many creatures there and learned many secrets from them.

In 1846, Ayita did return, and Hesutu kept all that he had learned secret from her. By 1848, settlers were beginning to pour into the area again, and he urged the people to follow him to the spirit world. He claimed that they could live in safety there, and would have access to powers that they could use to push the settlers from their land.

Not everyone agreed with Hesutu, and those that did not remained behind. Hesutu viewed them as cowards, unwilling to stand up for themselves and their people. Their decision to trade with the settlers and make peace with them would only end up in more sickness, death, and persecution, he was sure.

Hesutu and his people made deals with the Sidhe, once in the nevernever, granting them land and safety, for a price. They learned how to shapeshift and to cross the veil at will. In return, they fought on Summer’s side, striking out at any of summers foes. If these foes sometimes included their own people, they didn’t mind the chance to kill the cowards. 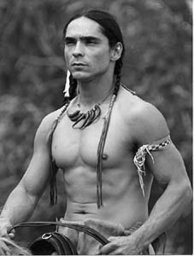