Chief Sewati is a weathered man in his 60’s who looks to have seen a hard life. His face bears the scars of smallpox, as well as a scar curving from his left temple, across his forehead and down into the puckered socket of his right eye, across his cheek, stopping just shy of his ear. The scar is where he took the name Sewati (Curved Bear Claw) from, shortly before becoming chieftain.

When Sewati was younger, he had set out on a spirit quest to get guidance of how to lead his people. He fasted for seven days, purifying his body before leaving the village. He wandered for a full day before he reached the spirit world, passing through the barrier to the nevernever.

When Sewati saw that he had finally reached the spirit world, he made an offering to the gods and made camp, awaiting his message. He remained there for three days before he spotted a man in the distance. The man came closer and Sewati saw the outline of a bear around the man; he begun to grow excited. Was his guide Ursa herself?

The man came into view and above his normal, brown eyes, were a second set of orange, glaring eyes. Still, Sewati saw the bear layered on top of the man, but now he could make out details that were just wrong. Curved horns sprouted from the beasts head, and it had six limbs. When it’s great maw opened, there were twin sets of slimy, serrated teeth.

A voice hissed to Sewati’s side, “Run! Run foolish mortal!” A smallish creature crouched in the bushes, no taller than his knee. He recognized it as one of the wee folk, and he knew better than to hesitate at a warning from the wee folk. “Hurry! It comes!”

Sewati turned to flee, and the man gave chase, his form changing till all that remained to be seen was the hideous bear’s form. The man was completely gone. Though Sewati was nimble and swift, the demon was quicker. It dealt Sewati a harsh blow across the face as he stopped to find the place he entered, and the man barely managed to defend himself from certain death. If the wee folk hadn’t distracted the demon for him, he couldn’t have made it through the way.

Sewati felt the presence of the demon behind him all the way home. At time, he heard things moving out in the forest, but the wee folk that his tribe revered kept him safe. By the time he made it back to the village, his eyes was lost and he was half dead.

Sewati went into his role as Chieftain with a huge burden on his shoulders. Settlers were the least of their worries. Demons were coming, perverting nature with their very existence.

The year was 1849, and Sewati assumed leadership of his tribe, taking on the role recently vacated by his father who had gone with Hesutu into the nevernever. Sewati briefly considered following them, but he decided to hold his ground and ready his people. Ayita had recently returned and with her advice and skills, Sewati felt his people had a chance to retain their home. It was hard work, but they did make a safe haven for their people, and brokered a peace of sorts with the settlers.

There were whispers of evil happening in the lands around them, but the demon never did find their village. Sewati didn’t know if it was for lack of trying, or because it had found other interests. Sewati knew it was out there somewhere, though. 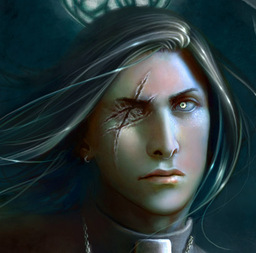